Beer of the Month – July

The Beer of the Month for the month of July is Founders Brewing Co. They have been brewing since 1997. Located in Grand Rapids, MI, Founders prides themselves on making full flavored ales in a broad range of traditional and experimental styles. Not only has Founders Brewing Co. been ranked in the top breweries of the world by Ratebeer.com or have several beers listed in the top one hundred beers of the world on Beeradvocate.com, but they also have won six world beer cup medals, four European beer star medals and three Great American Beer festival medals. If you have yet to try their beer, this is the time! Stop into Consumer’s Beverages and pick yourself up a 6-pack or 12-pack and rate their beer yourself! Also, beer sure to check out our ad page on our website to see what amazing deals we have going on! 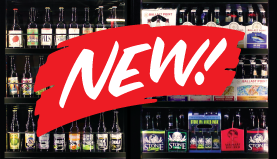