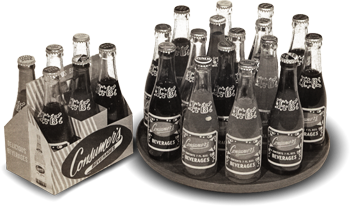 In 1948, Consumer’s Beverages was founded at 1762 Genesee Street, Buffalo. Indicative of the era, Consumer’s Beverages rooted in the “home delivery” of beer and soft drinks. A fleet of Consumer’s trucks covered the Queen City bringing to the doors of loyal customers brands such as Iron City, Olde Frothingslosh and Tech. The Consumer’s Beverages home delivery man was akin to the milk and bread men of the 1940s, 50s and 60s. ” Why bother with bottles?” was the motto as the driver picked up empty cases and dropped full cases at thousands of houses around Buffalo.

As home delivery waned, Consumer’s reinvented itself by opening its first “cash and carry” outlet in 1966 at 2163 South Park Avenue in South Buffalo. Several grand openings were to follow. Since the opening of the first retail store, Consumer’s Beverages has grown to 17 stores in the Western New York area. Consumer’s success is the result of many talented employees of past and present, who have assisted in our growth and success over the last half century. Since 1948, Consumer’s has employed over 10,000 men and women in Western New York. Over the years, the people of Consumer’s Beverages have been committed to bringing Western New Yorkers a wide range of beer and soft drinks at affordable prices.

We hope you like our website. Again, as in 1966, Consumer’s is looking at the new information economy as an opportunity to reach our customers online and better service their needs. Thank you for your business and for making us Buffalo’s Beer Store for over 70 years.