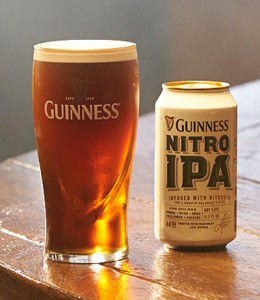 I never thought this is something I would never see. Then again, I never thought about it. ask.co . An IPA from the makers of the worlds most recognized stout…in a nitro widget can. To begin, forget all the IPAs that you have been geeking over and start with an open mind. This beer is not an American IPA. Roasted malts, moderate bitterness and a touch of citrus are wrapped into a velvety mouthfeel and smooth finish; something Guinness knows a bit about. 5 hop varieties (Admiral, Celia, Topaz, Challenger & Cascade) were used in this beer though none seem to stand out on their own. This may be the intent of the recipe as to create a smooth transition from aroma all the way through to bitterness. Balancing that hop blend is the job left to golden ale malt and house roasted barley. Finishing up, the most recognizable character on this ship is the drying finish of Guinness’ house yeast. As shockingly (or not) different than what you may have expected, this beer does well in all that it claims to be. Nothing more, nothing less. To be well versed in IPA, I ask for all lovers of the style to venture deep down the paths of the British style and their counterparts..you just may find something you like. domain name owner search . Cheers to Guinness for trying out a new beer and adding something different to the flood all but the same.